A retired electrical contractor whom I contacted through Craigslist told me the story that during the administration of Paterson Mayor Thomas Rooney (1972-74), all money from scrap was to go into a fund that the mayor’s office had control of, rather than being used by the contractors for their traditional annual celebration.  Some contractors snubbed the policy change by keeping the traffic equipment they took down in those years, therefore I can thank the former mayor for indirectly helping me obtain a vintage signal from my birthplace almost fifty years later! 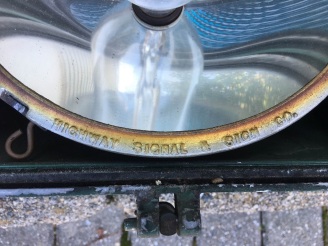 Chris Sebes (webmaster of MyTrafficLights.com) and I each visited the contractor’s garage in response to his ad on separate occasions. Chris bought a signal head made by Highway Signal & Sign Co. of Newark, NJ. Chris later offered the HSS signal to me, which I happily accepted (as evidenced by my smiling countenance above).  The light was configured for horizontal (i.e., “lazy”) mounting, a common practice in many NJ cities.

I was delighted to discover that the contractor had saved the end of a “trombone” style aluminum mast arm from the corner of Main & Market Streets. I was driven through that intersection many times as a child when my Mom and my aunts would take us downtown to shop at Meyer Brothers and other stores.   I mounted the signal I bought from Chris to the trombone mast and hung it from the basement ceiling.  I love having a cool Paterson artifact in the collection.

A footnote to this story: There were only a handful of fixed-face 4-way signals in the Paterson-Clifton area when I was growing up.  I fondly remember a pair of  4-way signals at the corner of Mill and Grand Streets in Paterson which were removed from service sometime in my early childhood.  Fast-forward to 2019; lo and behold, the contractor dragged them out of storage. These were a GE and a Marbelite, both of late 1940s vintage, both in his possession since the days of Mayor Rooney.

Due to a shortage of cash and space, I passed on the opportunity to buy either of the 4-ways, but it was pretty wild to see them come out of the woodwork after 45+ years, and yes, it is a little scary to think that I actually remembered them. Quite the blast from the past!