Conductor Artur Rodzinski and his wife with their happy poodle, 1944. 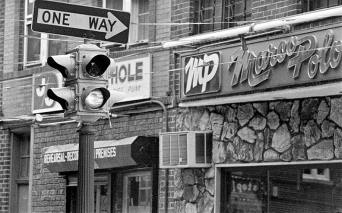 Do you remember the old-fashioned two-color (red and green only) traffic lights of New York City?  Whenever I visited New York in the 1970s, I was fascinated by the old 4-way signals with only red and green lights that were scattered around the city.  These quaint fixtures I saw were the vanishing remnants of the original GE and Horni/Ruleta signals that were installed from the 1920s through the 1940s.

New York City began installing standard 3-color signals in the early 1950s, while continuing to maintain thousands of the original units. In many cases, the older 2-color signals were upgraded to newer equipment without converting to three colors (see image on right).  In all, it took over 40 years for the last of the original 2-color signals to be replaced and even longer for the upgraded 2-color lights to finally be converted to 3 colors.

In the early years of my collecting, I received a generous gift from a fellow collector; a 4-way Ruleta signal. It was complete, but needed a fair amount of work, and after I had partially dismantled the light, I sold it. I always regretted that decision, so I kept my eyes open for a replacement. 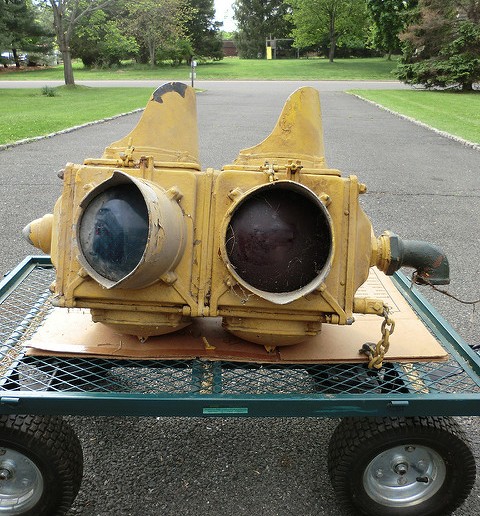 Above is the replacement light that I purchased in May 2012. I drove to New Hampshire to purchase it from a retired New Yorker.  According to him, the signal was taken down from Merrick Blvd in Laurelton, Queens in the mid-1970s and given to him on the spot by the contractor. This is evidently a later (1940s) variation of this type of signal.  It has the Horni design, but has no manufacturer name stamped or embossed that I can find.  The original wiring was plastic-coated, rather than the older cloth style, but the feed wires into the light were cloth. There is  a 2″ steel elbow at the top, indicating that it was mounted on an overhead mast.  It was configured as a 3-way signal, with one of the four sides covered by aluminum “blanks”.  To my surprise, there were lenses, reflectors, and light bulbs on all four sides.

New York City originally painted their signals either black or olive green.  All of them were re-painted yellow in the 1960s during the reign of Traffic Commissioner Henry Barnes.  I prefer the old fashioned look of the darker signals, so I stripped the yellow and black layers off  and then brush painted it with glossy Rustoleum black.  After painting, I wired it up with a custom circuit-board controller manufactured by Sean Breen.

Special thanks with this restoration goes out to several people, including: