After years of searching, in 2017 I finally found a cast iron NJ guide sign that had dodged the scrap heap. An eBay seller listed it with a fairly high price. I waited patiently over a couple months for him to realize that my offer was decent and we eventually made a deal.

Deducing from old Union County maps, I believe this sign was probably located in New Providence Township (present-day Berkeley Heights).  Note the two aerial views of the intersection of Glenside Ave and Glenside Road, taken before the construction of I-78 (top) and after.  The sign may have been posted at the location marked by the red circle in the top image, when the intersection was a fork in the road.  Southwest-heading drivers approaching the fork would either keep right to climb the hill to New Providence borough, or keep left (i.e. stay on the main road) to head toward Scotch Plains and Plainfield. The fork was adjacent to the entrance to the Deserted Village in the Watchung Reservation.

Guide signs like this were still around in decent numbers when I was a kid, but only a handful are left in the state today (e.g., Cranbury in Middlesex County still maintains a few of them). You can still spot quite a few of the original posts left in place, if you are obsessed enough to notice them. 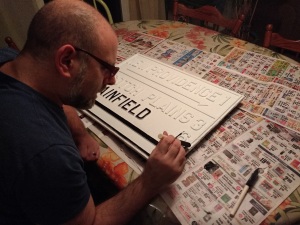 The photo set above documents the stages of preparation and painting from the sign’s “lead paint chip dispenser” stage (sic, Ed Tapanes) to the shiny, restored product. To avoid any possible blunting of the edges of the letters, I elected not to blast the sign. I started with a wire brush to remove the loosest paint and rust, then applied Soy Gel stripper and removed as much paint as I could with a scraper and awl. Once it was reasonably clean, I sprayed a few white coats, then used a sponge brush to apply the black to the raised characters, arrows and borders. Now it looks brand new, almost a century later.